Low calorie food swaps are generally pretty boring, right? Not at SuperFastDiet! We love food just as much as you do, so foodie swaps are our jam. Your typical low-calorie food swaps… like, for example, having grapefruit instead of an actual breakfast containing real food are all well and good. But they’re kinda pointless. Of course you can lose weight if you stop enjoying food like a normal human being. It’s those savvy foodie swaps which allow you to still enjoy life (and yes, wine too) which make the biggest difference.
Here at SuperFastDiet, we’re big fans of food, which is why we created a part-time diet based on intermittent fasting methods that lets you enjoy eating like a normal person most days of the week. Woo hoo!

Pumpkin instead of potato You can save a whopping 50 calories per 100 grams if you opt for pumpkin instead of potato. Both of these starchy veggies contain carbs, but pumpkin is a lot more nutritionally dense and contains less than a quarter of the carbs. Win!

Dried cranberries instead of white chocolate 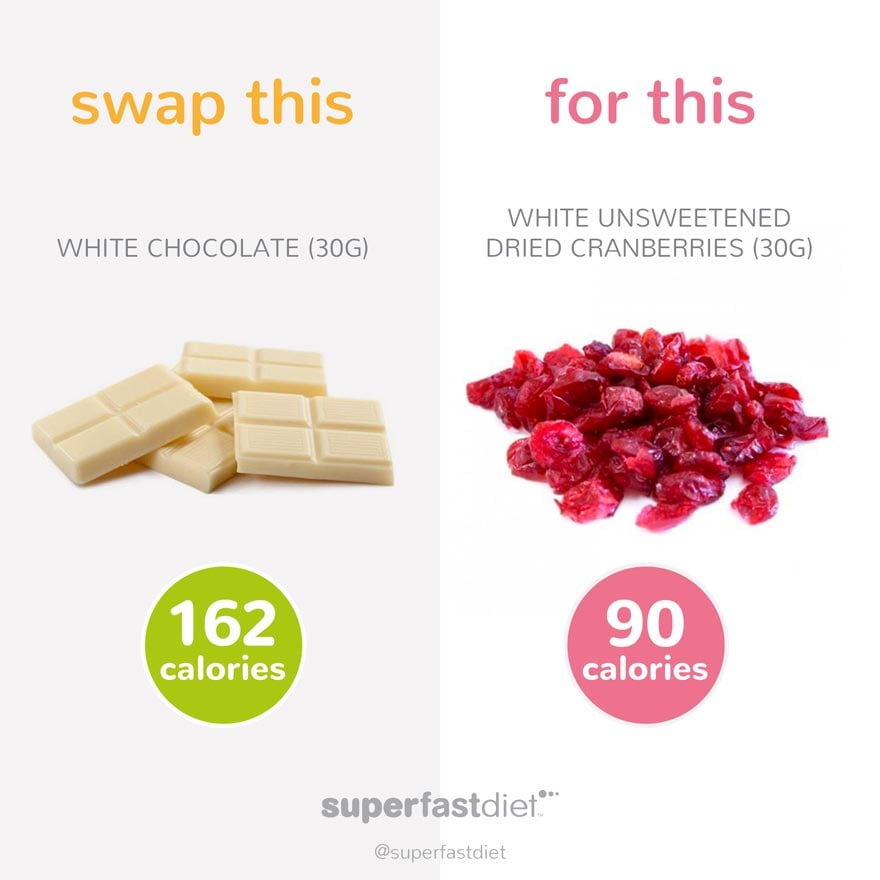 Got a sweet tooth moment coming on? We feel you. You can save a crazy amount of sugar and calories by reaching for unsweetened dried cranberries instead of white chocolate. Put that 150 calories to better use somewhere else, we say! Bonus? Cranberries contain anthocyanins which are a particularly effective type of antioxidant found in dark red and blue berries. Win!

Whole wheat bread instead of sourdough There are some things you just have to find out for yourself. And the calorie counts of some breads is one of them. You wouldn’t think there’d be such a huge difference, but there is. Opting for whole wheat bread instead of fancy sourdough or vienna can save you upwards of 200 calories on that cafe breakfast. Which leaves more for coffee, right?

Veggies instead of salad This might sound a little counterintuitive, but stick with us. We love veggies! But isn’t salad just raw veggies? Well, yes, but it’s what you serve with said veggies that can have the biggest impact. Most people have a tendency to drown their salads in dressing. And therein lies the problem. If you opt for simple, boiled veggies with dinner, you’re less likely to want to dress them in sauce. Save the 130-odd calories for something better and opt for steamed veg instead.

Edamame instead of peanuts Got a hankering for something salty? Snack smart and go for edamame instead of those greasy peanuts and you’ll save upwards of 140 calories in one sitting. That’s enough for another glass of champagne! Edamame also contain a tonne more calcium, iron, vitamin C and potassium than peanuts.

Porridge instead of sugary cereal Sometimes it’s the old-fashioned things that are a better option! Oats are incredibly good for you, they contain both soluble and insoluble fibre and they’re packed full of nutrition. Plus, opting for oats instead of some of those fancy-pants sugary cereals can save you around 80-100 calories per serve.

Popcorn instead of chips or crisps We consider this one of the savviest swaps, because you barely notice the difference. Popcorn and chips are both salty, crunchy and perfect for a a night at the movies. But there’s a big difference, calorie-wise. A cup of popcorn only contains about 30 calories, whereas a cup of greasy, deep fried chips or crisps can contain up to 140 calories. Yikes! Besides that, popcorn contains more dietary fibre, polyphenol antioxidants and a stack more vitamins.

Black coffee instead of full milk latte with syrup Ahh coffee. It makes mornings better, annoying people more tolerable and you more productive. But did you know there’s a huge difference in the calories when you compare your morning cup of joe and a fancy barista made latte? A basic black coffee made at home contains only about 4 calories per cup, whereas the drink de jour at that trendy coffee shop can contain up to 400, depending on which size you order (and upwards of 50 grams of sugar too.) Sip smart and opt for black coffee or coffee with just a small splash of milk and you’ll save on the calories big time.

English muffin instead of a bagel This one shocked even us, because really… who notices the differences between a bagel and an English muffin? They’re both fancy kinds of toast. Cut the calories in half by choosing an English muffin instead of a bagel and your skinny jeans will thank you. You’ll save about 120 calories, not including toppings! #YoureWelcome

Apple slices instead of crackers Bear with us, we know we’re starting to mess with some of your favourite foods now, but switching your cheese accompaniments can give you big wins on the scales and deliver improved nutrition too. Besides, you still get to have cheese, which is the most important thing, right? Choose fresh apple slices instead of cheesy crackers and you can bank more than 130 calories per 30 gram serve. Bonus? Apples contain quercetin which has been linked to decreased cancer risk.

Champagne instead of Bloody Mary Yes, we went and saved the best for last. It might sound crazy, because technically alcohol wouldn’t normally count in a blog about low-calorie food swaps, but… the good news is, you can still enjoy a sneaky alcoholic beverage on a part-time diet.  In fact, we wrote a whole blog post about how wine is a superfood. But when it comes to your beverage of choice, it can make a big difference to how many calories you consume over the course of a day (or night). A Bloody Mary might look healthier, but in reality, it can contain more sugar, more alcohol and loads more sodium than a simple champers. Save 100 calories by popping the bubbly (and opt for an extra dry drop to save big time.)

What are some of your favourite low-calorie food swaps?

Combining small, clever changes like these with intermittent fasting is the best way to achieve your results this spring. It’s small changes that you’ll barely notice that really make the biggest of differences. If you really dislike a food, you’re unlikely to continue swapping it in for something else you prefer. But if you can make small, incremental changes, ultimately, these are the ones that’ll add up. We love intermittent fasting because it’s less strict than a lot of other everyday diet plans – there’s no calorie counting, no food diaries and no depressing portions of broccoli that look like icicles. You just pick the days you’re going to be good, and relax the rest of the time. Sounds way easier to us!